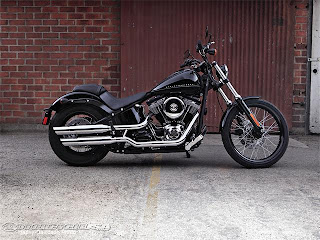 Harley Davidson's newest model, the 2011 Blackline. It is a version of their popular Softail model.
Posted by Scott Wheeler at 6:25 AM No comments:

From the Suburban Journal and Stltoday.com
Posted by Scott Wheeler at 6:33 AM 1 comment: 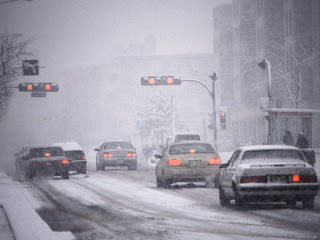 Posted by Scott Wheeler at 6:47 AM No comments:

So far this winter we've had a couple of snow days. The kids are off school and the area braces for anywhere from 3 to 6 inches of snow and sleet. Depending on what part of town you live in, you could have anywhere from 1-3 inches of snow on the ground, with another 2-3 inches to come later. As usual, the local TV stations play up the winter storms as a severe threat to the area, and try to convince those gullible viewers that they might be trapped in their homes for the better part of the week. I'm sure the local grocery stores sell out of milk, eggs, and bread, and perhaps some ice pellets, as the panicky shoppers buy into the story line. But here's what usually happens, only 1-3 inches of actual snow falls on the ground, maybe more snow to come later the weathermen say. Hardly a blizzard! The morning traffic reports tell of accidents on the highways and byways as hapless drivers make their way to work in less than favorable driving conditions. The problem is some people drive too fast for the slick road surfaces, but far too many, drive too slow, which is also troublesome. The key is to maintain a steady pace that is with the flow of the others. Keep extra distance between yourself and the car in front of you, and do not panic if someone hits their brakes. As an owner of a motorcycle, I am aware of the safety courses available for new riders, but I think there should also be driver safety (read defensive driving) courses for automobile operators also. Trial by error has no place on the roads where other people's lives are concerned. There is a continuing debate over banning cell phones in cars, but not knowing how to drive in severe weather conditions is worse in my mind. Well, at least we don't live on the east coast where they actually do have severe weather conditions!
Posted by Scott Wheeler at 6:25 AM No comments:

Well, now that the excitement and freshness of the New Year has worn off a little, reality sinks in...we're still in the middle of winter. With daily temperatures in the 20's and 30's, just a quick walk outside will remind you of that. Throw in a cloudy day and a stiff breeze (think wind chill factor) and it really hits home. As a child I always liked winter. Snow days to make snowmen and snow angels, plus the added bonus of no school if there was enough of the white stuff. I remember playing outside in the frigid cold of Ohio for hours, and not coming inside until my lips turned blue or my gloves got wet, unless I had to go to the bathroom. Winter was fun! Having snowball fights with the neighbors and building snow forts was what winter was all about. The past few years living in St. Louis, I've noticed that we don't seem to get as much snow as we used to. Not that I mind that much. Oh sure, I would like to see some for the kids to play in and experience, but now that I am an "adult", snow means traffic jams and scraping ice off windshields. If I am not on a ski slope somewhere, I really don't want to see much snow. Another thing I've noticed about getting older is my tolerance of the cold. It used to be I could handle any temperature. I survived the Blizzard of '76 in Toledo, Ohio and remember sub-zero temps for weeks, along with 3 feet of snow and snow drifts as tall as our 2 story house. Now if it's below 32 degrees I make a dash for the safety of my car and the blast of heat from my dashboard (which can't come fast enough). In addition, I now must confess that I sleep with my socks on in the winter to keep my feet warm! Back in the day, it was my boxers and nothing else. What has happened? Has my skin gotten thinner? I have gained many pounds since high school so you would think that my extra padding would help in this area but it doesn't seem to. I guess this is one of the mystery's of life. Oh well, time to get another cup of coffee...I wonder how many days until spring training begins?
Posted by Scott Wheeler at 8:24 AM No comments: