The other day I was driving in my car and listening to the radio, and I overheard the disc jockey talk about how she was looking forward to Thursday because it was "Turkey Day". She made no mention of the fact that it is actually called Thanksgiving Day, and has been an official national holiday since 1941 (although it has been celebrated unofficially on the last Thursday of November since Abraham Lincoln was in office and declared the day a "National Day of Thanksgiving"). So why do people try to be cute and call it Turkey Day? Actually, while most people seem to point to the year 1621 as when the first "Thanksgiving" was celebrated (when the Plymouth colonists and Wampanoag Indians shared an autumn harvest feast), there was probably no turkey involved. According to information I found on the history.com website, here is what was probably served on that day: venison and fowl (probably not a turkey) and certainly not mashed potatoes and pumpkin pie (who likes this stuff anyway?). The most detailed description of the "First Thanksgiving" comes from Edward Winslow from A Journal of the Pilgrims at Plymouth, in 1621:

"Our harvest being gotten in, our governor sent four men on fowling, that so we might after a special manner rejoice together after we had gathered the fruit of our labors. They four in one day killed as much fowl as, with a little help beside, served the company almost a week. At which time, among other recreations, we exercised our arms, many of the Indians coming amongst us, and among the rest their greatest king Massasoit, with some ninety men, whom for three days we entertained and feasted, and they went out and killed five deer, which they brought to the plantation and bestowed upon our governor, and upon the captain, and others. And although it be not always so plentiful as it was at this time with us, yet by the goodness of God, we are so far from want that we often wish you partakers of our plenty."
So to the disc jockey and anyone else who might call Thursday, "Turkey Day", let's get it right, it's Thanksgiving. Be thankful, show thanks and give thanks! We do have much to be thankful for, even in these crazy times.
Posted by Scott Wheeler at 10:00 PM No comments: 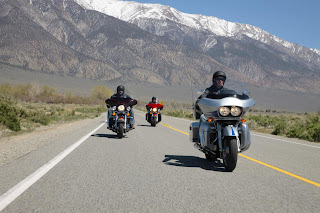 Posted by Scott Wheeler at 6:47 AM No comments:

Leader of the pack

While there are not too many things more exhilarating than riding a motorcycle, riding in a large group of motorcycles is one of them. I usually ride alone because I tend to make last minute decisions to go out based on weather conditions and family activities, but occasionally I will plan a ride with a friend or two. Recently I was part of a group of 20 or so bikers riding through the winding roads of the Missouri wine country near Defiance, MO. Riding in a larger group brings some additional challenges, but the experience of riding in a large pack can't be beat. While one must be cautious of the riders in front and behind you, the roar of the engines and the looks and gazes of people you pass by makes you proud to be one of the pack. When riding in a larger group, motorcycles usually form a staggered formation to give room in front and back for stopping, but allowing for a tighter grouping of bikes. If the roads become too narrow or have many sharp turns, a single file formation may become necessary. Many motorcycle dealerships organize group rides on a regular basis. The Veteran's Day parade is a time when dealerships, clubs and riding chapters come together for a bigger than life experience downtown. Hundreds, if not thousands of motorcycles will descend upon downtown St. Louis next weekend to take part in the annual parade. Motorcycles of all types, sizes, and colors, will bring up the rear of the parade to the delight of children and onlookers alike. I took part in the parade last year and it was definitely a highlight of my year. So if you're a biker, find a group to ride with soon. It sure beats riding alone. And if you just like to see motorcycles, come down to the parade and witness a multitude of bikers like you've never seen before...all in support of those brave soldiers who have fought for our freedom as Americans!
Posted by Scott Wheeler at 7:21 AM No comments: