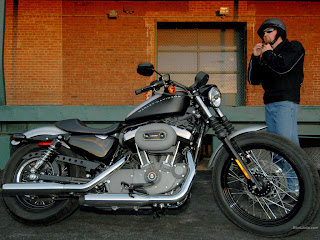 Posted by Scott Wheeler at 7:46 AM No comments:

Is a Sportster really a girl's bike?

Today's piece is a guest post written by the good people at Gateway Harley Davidson in St. Louis, MO.  It challenges the idea that their entry level Sportster line is "just a girl's bike", by going through some facts you may not be aware of about this Harley Davidson model.

A Sportster® Is A Girl’s Bike

Most people suggest a Sportster® to an unexperienced individual because it is currently the smallest Harley-Davidson® bike still in production. But let’s throw out some facts about the alleged “girl’s bike”, the Harley-Davidson® Sportster®.
So next time someone suggests that you get a Sportster® because it is a girl’s bike, don’t be offended. Just kindly inform them that you would be proud to ride a Sportster®. They have a classic style. They are agile and powerful. They are fantastic machines.
What else is impressive about the Sportster® motorcycle?
Posted by Scott Wheeler at 7:36 AM No comments: